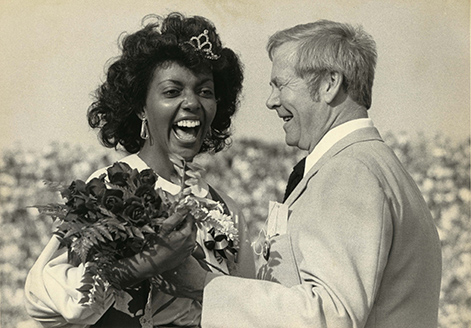 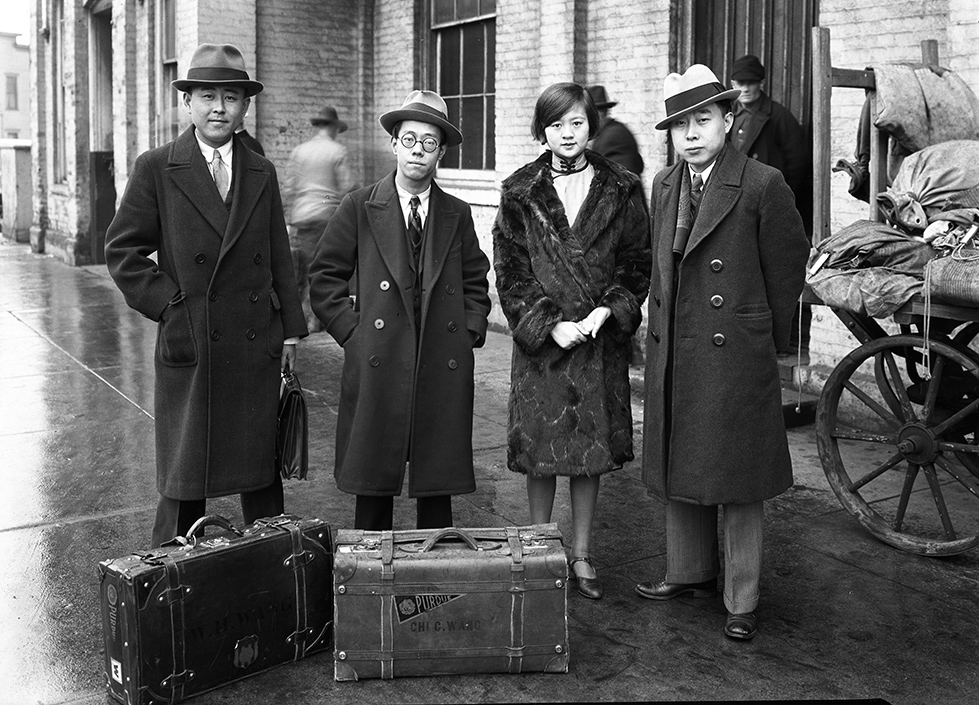 Chinese students from Purdue University at the Lafayette train station, leaving to aid their native country in its war with Japan. Feb 1932.  From MSP 25, J.C. Allen and Son Inc., photographs and negatives. 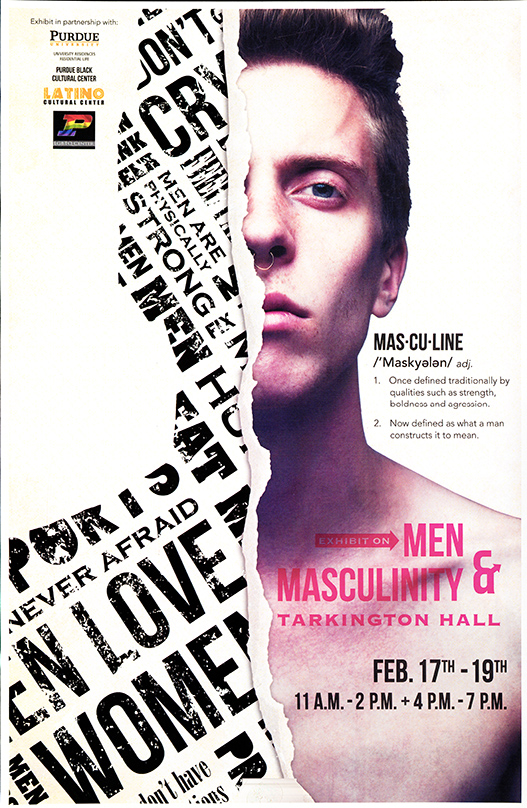 Poster for an exhibit sponsored by several student groups on Men and Masculinity. From UA 162, LGBTQ Center records

MSP 154 - Purdue University African American Students, Alumni and Faculty collection, 1961 – 2014
The Purdue University African American Students, Alumni and Faculty collection contains the historical manuscript “Evolution of the Black Presence at Purdue University," by Alexandra Cornelius, second draft, July 15, 1994 and research material that was used by Cornelius in writing the manuscript. Cornelius, a graduate student in history began researching African-American history at Purdue for the Office of Diversity and Multicultural Affairs. Her research project was spurred on by the upcoming silver anniversary celebration of the Black Cultural Center on the West Lafayette Campus in 1995. She used the research project to learn about the many contributions that members of the Purdue Black community have made to the university and to learn of their experiences at Purdue decades ago. Types of materials include: brochures, by-laws, clippings, directories, flyers, historical documents, newsletters, photocopies of articles, programs, questionnaires and statistics. Individuals featured in the collection include Helen Bass Williams, Glenn Robinson, Lawrence Burton, Judge A. Leon Higginbotham, Jr. and Eugene B. Jackson. Also included is information on former faculty members Antonio (Tony) Zamora, director, Black Cultural Center, 1973-1995 and Orlando L. Taylor, recipient of honorary Doctor of Letters, 1994.

MSA 63 -Kassandra Agee Chandler papers, 1971 - 2012 (Bulk 1977 - 1982)
The Kassandra Agee Chandler papers document Chandlers' time as a student at Purdue, with particular focus on her nomination as the first and only African American Homecoming Queen at Purdue. The papers also document the many student activities with which she was involved, her career and her alumni involvement. The collection includes personal records, newspaper clippings, photographs, correspondence, and artifacts. This collection would be useful to researchers interested in student life in the 1970s and 80s, women in business, and the Business Opportunity Program. Kassandra Agee Chandler was born in Gary, Indiana and graduated from Purdue in 1981 with a BS in Accounting. As a sophomore in 1978, Agee was named Purdue's Homecoming Queen out of an initial group of twenty-four competitors. She was the first African American to hold the position. Ageewas also an active student, a member of Alpha Lambda Delta freshman honor society, Purdue Pals, and the Black Voices of Inspiration Choir.

MSA 18 - Cornell A. Bell papers,1933 - 2008 (Bulk 1973 - 2007)
Cornell A. Bell was director of the Purdue University, Business Opportunity Program for thirty-seven years until his retirement in 2006. As director/chairman of the Business Opportunity Program, which was designed to create a more diverse student body, Dr. Bell helped recruit hundreds of graduate and undergraduate students from underrepresented communities to the West Lafayette campus. He was also active with the Graduate Management Admission Council nationally to increase diversity in schools of business throughout the country. He distinguished himself in education with his personal involvement and dedication in helping provide opportunities to hundreds of students through the Business Opportunity Program. Bell's contributions to recruiting underrepresented students to Purdue can be found in the entirety of the collection, but of noteworthy importance is the material from “The Minority Applicant: Recruitment, Evaluation, and Admission” binder in box 2, folders 31-33 and the Business Opportunity Program photographs in box 4, folder 16.

MSF 471 - Phoebe Farris papers,1972 - 2011
The Phoebe Farris papers document the professional and personal life of Purdue professor of art design and women’s studies, Phoebe Farris. It reflects her contribution to the art scene in America, shedding light on Native American history. The collection may be useful for researchers interested in Purdue's Native American community. The types of materials include written publications and reviews of other’s publications; contributions to art shows and exhibitions; correspondence; career and personal photographs and articles. Farris established herself as a well-known artist, a professor, a licensed CCR/DUNS art curator/dealer, a registered art therapist, a documentary photographer, an author, and an editor. She explored issues relating to race, gender, indigenous sovereignty, Native American Studies, peace, social justice, and the environment. She proudly identified herself as a part of the Powhatan-Renape/Pamunkey Native American tribe, and was involved in national/international indigenous rights issues.

UA 159 - Purdue University LGBTQ+ Student Alliance records, 1994 - 2015
The Purdue LGBTQ+ Student Alliance records (1994-2015) document the history of LGBTQ student organizations on Purdue’s campus since the mid-1990s. As an umbrella organization for the LGBTQ+ community at Purdue University, the collection contains materials from related relevant entities throughout the years, including the Purdue Ally Association, the LGBT Advisory Board, and the Office of the Dean of Students Diversity Committee. Of particular interest might be the Ally Association Member Manual and the various LGBTQ-related newspaper clippings, as they paint a picture of student activism on campus as well as the legislative battles and hate crimes against the LGBTQ+ community in the state and nationwide. The collection was transferred by the organization in 2016. The collection may be useful for researchers interested in Purdue’s and Indiana’s LGBTQ history and student activities. Types of materials include: newspaper clippings, correspondence, printed materials (flyers, brochures, posters), banner, canvas, and T-Shirts.