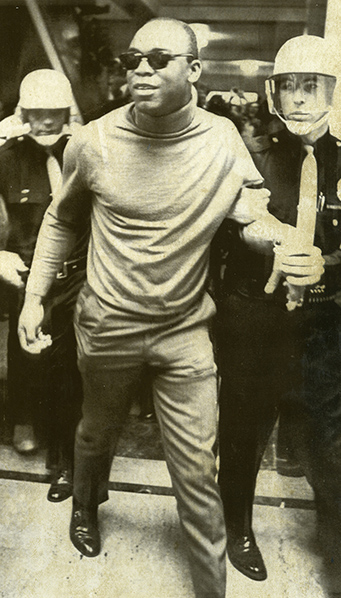 Purdue Football star, Leroy Keyes is arrested during a demonstration during a protest against the proposed tuition increase in April 1969.   From MSP 229, Collection of Leroy Keyes Press Photos. 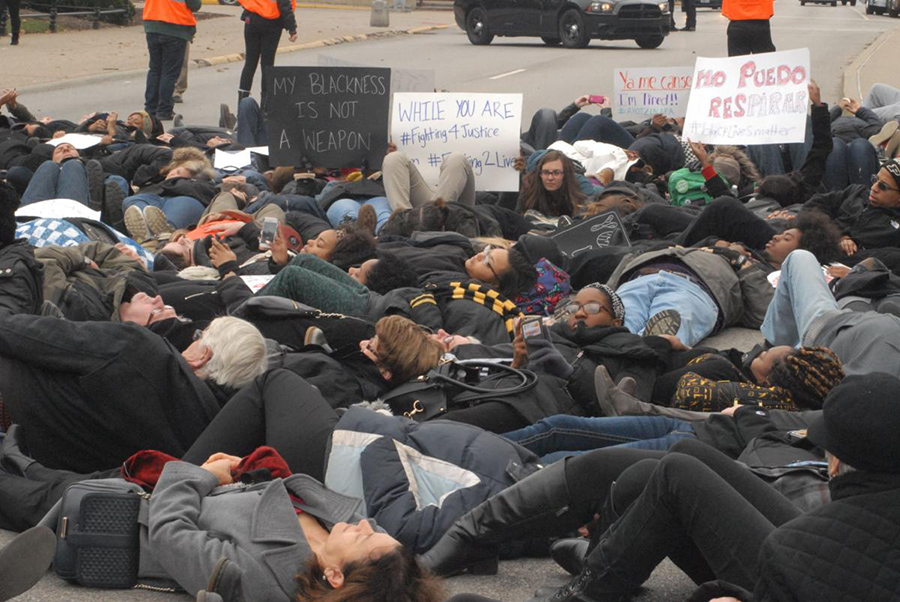 Organized by the Purdue Social Justice Coalition, Purdue Students staged a “die-in” by lying down on State Street and blocking traffic in December 2014. The protest was in response to the wave of violent actions across the country by police against people of color, galvanized by the shooting of Michael Brown in Ferguson, MO. Photo compliments of WBAA. 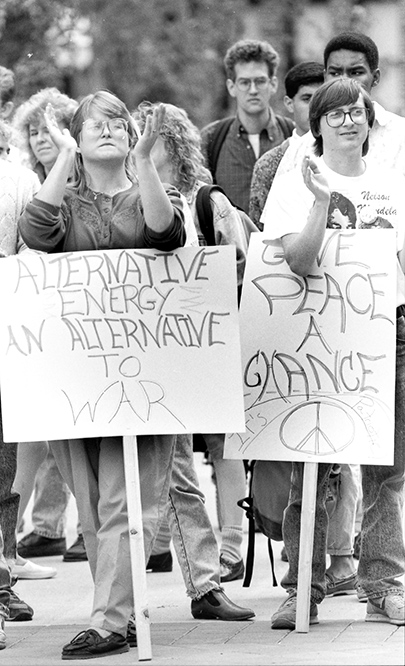 Purdue protest against the Gulf War in 1991.  From UA 62, Purdue University Office of Marketing and Media photographs collection. 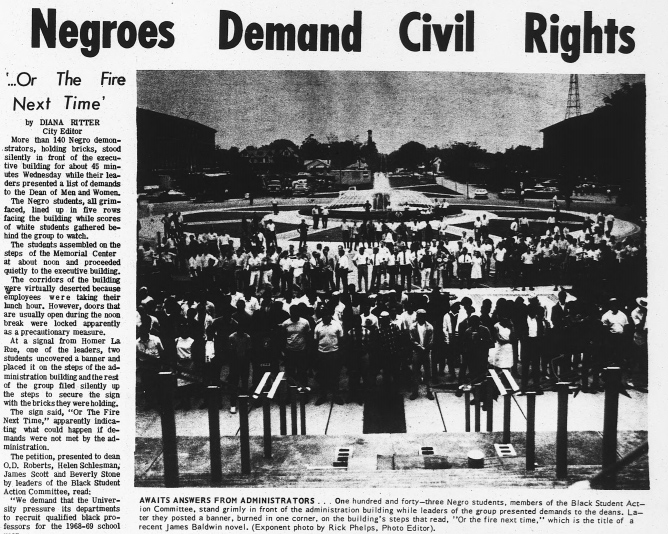 Exponent article about the African American student protest held outside the Administration Building (now known as Hovde Hall).  About 140 students presented a list of demands to improve conditions for Black students at Purdue.  From Exponent, May 16, 1968.

MSF 495, William Buffington Collection of Student Protest papers, 1967 - 1984
The William Buffington Collection of Student Protest papers (1967-1984; .25 cubic feet) documents student protests against U.S. military involvement in Southeast Asia that took place on and off Purdue University Campus. This collection also documents student activism against tuition hikes, as well as the university and police action taken against protestors. Beyond official university correspondence and print journalism, the papers include several editions of campus underground and alternative newspapers, as well as documents from leftist student organizations. Though the collection spans from 1967-1984, most material focuses on the years 1969-1970. Types of materials include: newspapers, clippings, memos, handbills, leaflets, correspondence, lecture notes, and other printed material.

MSF 467 Barbara Cook papers, 1932-2012
Born in 1929, Barbara Cook came to Purdue in 1956 as a counselor in the Office of the Dean of Women. One of her early responsibilities as counselor in the Dean’s office involved serving as an advisor to Mortar Board, a senior-student honor society over which she presided for nearly thirty years. Cook also served as director of the Placement Service for Women, assistant and associate Dean of Women, associate Dean of Students, and, from 1980-1987, Dean of Students. She was a lecturer in the School of Education starting in 1970, and a professor of education from 1987-1989. The Barbara Cook papers documents the life and work of Barbara Cook, predominately concerning her work as a student personnel administrator and instructor at Purdue University. Cook’s collection of research files and essays on women’s issues, especially in regards to education, could be useful for any researcher interested in feminist movements of the 1960s and 1970s. Portions that are of relevance to student unrest include the two “student unrest” binders of Series 8, located in Box 10, which provide thorough documentation of the various clashes between students and administration during the turbulent years of 1968 – 1969. The material is comprised of reports, memorandums, correspondence and newspaper clippings. Topics include the Green Guard Ice Cream Social, the Counter Orientation of the fall of 1968, the placement controversy, the Exponent, the controversial "Bauls" issue, the black power salute used at Purdue events, and the fee and tuition increases.
Also of interest is student unrest research material that Cook compiled. Following the student unrest that took place during the 1968-1969 academic year, Cook took a sincere interest in trying to understand the phenomenon that was taking place on colleges and university campuses around the nation. Six folders in Box 20 contains material that Cook used in her research. These include scholarly and general public articles, reports, correspondence, transcripts of talks that she gave, notes she took at various meetings, essays, and memos. Box 7 contains related material including Title IX and the Equal Rights Amendment, gay rights, students’ rights, search and seizure, and student mental health.

​MSP 300 - Clint Fink papers 1864-2012 (Bulk 1960-1995)
Clint Fink was a social psychologist, serving as a postdoctoral researcher at the University of Michigan's Center for the Study of Conflict Resolution, a researcher at the Institute of Communications Research and the Department of Political Science at the University of Illinois, and a visiting scholar in the political science and sociology departments at Purdue. An ardent peace activist, Fink’s peace activism extended from the 1960s through the 2000s. At the University of Illinois, he engaged in independent and collaborative research on peace theory and action with Dr. Berenice Carroll, who would also later come to Purdue. He was a chair and executive director of COPRED - Consortium on Peace Research, Education and Development, and a co-editor of the COPRED Peace Chronicle. Other organizations he was involved in include the Center for Research and Conflict Resolution which published the “Journal of Conflict Resolution,” the Swarthmore College Peach Coalition, and IRPA – International Peace Research Association. While at Purdue, he founded the Lafayette Area Peace Coalition, which was started in response to the Gulf War in 1991.
The Clint Fink papers document Fink's life and career as a peace activist and educator. Relevant activist papers are located in Series 1. Career, Sub-Series 4, Peace Groups and Activism, Boxes 6, 7, 8, and 12. The papers document his relationship and work with Dr. Berenice Carroll, his involvement in various organizations and publications including an alternative newspaper that he created called The Community Times. The collection includes articles, notes, correspondence, personal artifacts, photographs, and publications.

UA 51 - Frederick L. Hovde papers, 1908 - 1983
Frederick Hovde was the 7th president of Purdue University, serving from 1946 to 1971, making his tenure the longest in Purdue history. The Frederick L. Hovde Papers (1908-1983; 63.5 Cubic ft.) document his life and career as an engineer and educator. This collection contains several folders pertaining to student unrest. Box L contains two relevant folders, one containing information about the Black student protest in 1969, intellectual freedom, his dealings with the Indiana’s State Legislature’s demands to fire a graduate teaching assistant because of his activism activity, and his dealings with the Peace Union’s demands to bar recruitment services on campus by the FBI, CIA, and Dow Chemical. A second folder contains a collection of newspaper articles on student unrest. Box 1 contains information about an American Flag desecration incident that took place at Purdue in March 1966. Self-proclaimed anarchist Joffre Stewart of Chicago, who was invited by the Purdue chapter of Students for a Democratic Society (SDS), desecrated a flag in protest of the Vietnam War. The incident made national headlines. The folder contains newspaper articles from around the country along with correspondence between President Hovde and individuals who expressed their displeasure with the event.

Collection of Leroy Keyes Press Photos 1967-1969
Collection of four press photos of Purdue University star football player, Leroy Keyes, including one of his arrest by campus police in 1969 during the demonstrations that took place over the tuition increase controversy. On April 21, 1969, after students’ request to sit in on a budgetary meeting pertaining to a proposed tuition increase was rejected by President Hovde, students staged a sit-in in the halls and staircases of the Administration Building. After refusing to leave the building, forty-one students including Keyes, were arrested.
Keyes enrolled as a student in the Physical Education program in 1965 and played on the football team as a half back from 1966-1968. He was named the Big Ten Conference Most Valuable Player after a record-setting season and broke those records again the following year. He was a consensus All-American in both 1967 and 1968, and was a finalist for the Heisman Trophy both years (finishing in third and second place, respectively). He played in the January 1967 Rose Bowl game, which Purdue won 14-13 over the University of South Carolina. Keyes graduated in 1969 with a Bachelor of Physical Education degree and was selected second overall by the Philadelphia Eagles in the 1969 NFL Draft, where he played for four seasons before being traded to the Kansas City Chiefs.

UA 166, Occupy Purdue Movement records, 2017
The Occupy Purdue Movement was born in the Spring semester 2017. In the Fall 2016, Purdue University witnessed fascist propaganda posters displayed across campus. Because the university administration failed to publicly condemn the posters, students, faculty and staff rallied in front of Hovde Hall presenting the University administration with a list of five demands, including a public denunciation of the posters, an investigation into who placed the posters on campus, and the reinstatement of the Chief Diversity Officer. Students met for another protest on January 20, 2017. During this protest, students, faculty and staff were determined to occupy Hovde Hall during business hours until the university leadership either issued a public statement agreeing to the demands or agreed to a meeting with the group. After ninety-one days of occupation, the university agreed to meet many of the demands. The Spring semester concluded with Occupy Purdue receiving the LGBTQ Center Outstanding Organization Award 2017. The collection documents materials associated with the Occupy Purdue protest movement which centered heavily around topics such as white supremacy and women's and minority empowerment. The collection may be useful for researchers interested in student protests in the twenty-first century.

MSP 150 - Sisters for Health Education (S.H.E.) records 1978-1982
Sisters for Health Education (S.H.E.) was a Purdue University student organization which functioned to inform, support and provide referrals to women in the Purdue community regarding birth control, unwanted pregnancy, rape prevention and counseling, and general women’s health concerns. The group began in 1979 as an effort by three staff members to create a small women’s health center. This effort was resisted by the university administration because of the fear of abortion counseling. The idea for a women’s health center was instead applied to creating a student group, led by student Marcia Whisman and advisor Jackie Kassouff. Eventually, the organization opened a small counseling center on March 2, 1981, staffed by community volunteers and partnering with local groups such as Planned Parenthood, the YWCA, local churches, and women’s organizations. The archives has no record of the demise of the program, however there are no collection materials available after 1982.
The Sisters for Health Education (S.H.E.) records (1979 – 1982; 1.4 cubic feet) documents the creation and operations of this Purdue student organization. The educational materials in this collection record the kinds of sexual and reproductive health information available to college students at the time. The collection also shows the difficulties encountered trying to establish an organization that talked openly about issues of abortion, birth control, and rape during this era. Types of materials include circulars, clippings, correspondence, and planning notes.

​MSP 99, Collection of Student Newspapers at Purdue University, 1939 - 2008
The Collection of Student Newspapers at Purdue University includes newspapers produced by students at Purdue University and the Greater Lafayette area. It primarily features underground newspapers that reflect the counterculture of the 1960s-1970s. Other newspapers, primarily from the 1990s-2000s, feature varying political perspectives, such as the conservative Purdue Review. The collection also includes independent student newspapers that focus on apolitical audiences, such as international students. Some issues of newspaper runs are missing, and some newspaper runs were limited to a single or a few issues. Types of materials include newspapers, news clippings, and broadsides.​