Greetings and welcome to a new year! A year that I think may prove to be one of the most interesting ones for the government publications community. This was the feeling that I came away with from last fall's Depository Library Conference. After listening to the new public printer, Bruce James, I realized we would be dealing with a different type of administrator than we have probably dealt with before. His agenda may not coincide with what we have traditionally perceived to be our roles as government documents librarians, and our challenge will be to re-evaluate our priorities so that we may preserve/protect what we see as essential government information and how our public accesses it.

This brings me to my real issue, getting involved in your stadewide government publications organization. INDIGO is an active and dynamic group with interesting and committed people that can do a great deal for your professional development. Since many of its members wear many hats in their respective positions, that development may not be limited exclusively to government documents. This is the organization that I have received the most professional gratification from in my career.

We not only hold two informative meetings each year, we have ongoing projects in website development and revising the state documents plan. All this takes commitment from our organizations membership. This is where you come in. Looking at our list of office holders, I am gratified to see some new names. But there are also names that have been active in INDIGO since its inception; we even have one officer doubling up on commitments. While this is good for continuity, we need and want new people to carry the torch! (Hey, some of us aren't all that young anymore.) I know that you are busy, everyone is. So please become involved, attend meetings, and help plan the future of government publications and INDIGO. (Jackie Johnson)

After the Indiana state capitol was moved from Corydon to Indianapolis, legislative action was taken at the Indiana General Assembly's first session February 11, 1825 with an act approved for providing that books in the Indiana Secretary of State's office, together with such as might be added later, should constitute a state library. An 1831 act authorized the Indiana Secretary of State to purchase "two of Tanner's maps of the United States of the latest edition" to be preserved in the library. In 1832 he was authorized to purchase Gales and Seaton's Register of Debates in Congress. In 1833, he was authorized to purchase a full set of Niles Register.

Selective depositories choose specific categories and publication titles in various formats that they wish to receive based on the needs of their local clientele and congressional district. A selective depository must retain selected publications for a minimum of 5 years, and then may dispose of those publications, subject to federal statutory requirements and disposal guidelines created by the regional depository.

In FY 2002, GPO distributed over 14,000 tangible federal documents in print, microfiche, and CD-ROM formats to the Indiana State Library. As of September 2002, every federal depository and anyone with Internet capability has access via the GPO Access website to more than 140,000 titles on GPO servers and over 91,000 additional titles through links to other federal agency websites. The GPO Access website provides use of over 2,400 databases through more than 80 applications.

Public access to federal information is a fundamental creed of American democratic ideals dating back to the founding fathers. In 1822, James Madison wrote to W.T. Barry, "A popular government without popular information, or the means of acquiring it, is but a prologue to a farce or a tragedy; or, perhaps both. Knowledge will forever govern ignorance and a people who mean to be their own governors, must arm themselves with the power which knowledge gives." This is the premise upon which libraries are rooted: that the public cannot politically function in an informed manner without information, and in particular, information conceived, published, and disseminated by the federal government. For more than 140 years GPO has kept America informed. The Indiana State Library whith its rich historical federal document collection and commitment as the regional federal depository joins GPO in keeping Indiana citizens informed. (Doug Conrads-Senior Subject Specialist for Serials Cataloging and Federal Documents Catalog, Indiana State Library)

Indiana LInks to Government Information-INDIGO now has its own domain name (inlinksgov.org) and Web Site-Indiana Links to Government Information, a guide to local, state, federal, and international government information (www.inlinksgov.org/). This website's goal is using INDIGO members expertise to develop value-added, enhanced guides to government information useful to Indiana citizens. The site will also link to contact information at Indiana's depository libraries so that anyone can reach a person who can help them locate the government information they need. The page is now available, but needs volunteers to provide content behind the gateway we have created. There is need for pages on a variety of subjects. We especially need someone to work on a page for Indiana Government and Indiana Local Government. Pages created for Indiana Links to Government Information must be housed on your own server and must be maintained and kept current by the creator. If you have developed a page for the website, just send me the URL and I will add the link to the Web gateway page. For further information about adding website content contact Cheryl Truesdell (truesdel@ipfw.edu) or call (260) 481-6506 (Cheryl Truesdell)

The PSA idea was suggested by our Dean of University Libraries and filming was done by a campus crew. It ran several dozen times during Fall Semester 2003. (Diane Calvin)

Depauw University News-We have recently entered into a selective housing agreement with Putnam County Public Library. We hope to transfer material written for the general public about child raising, health care, small business, crime and community concerns etc. to the public library. If any INDIGO members have procedural suggestions they are welcome. (I hope to present at FDLP this spring if there's room on the schedule and interest and will be putting in a proposal to speak about selective housing. If any of your ideas are particularly helpful and I get to talk about them, I will credit the source. However, if you hope to use them in your own presentation or publication, let me know and I won't mention them.) (Kathryn Millis)

Indiana University-Bloomington News-Government Information, Microforms, and Statistical Services prepared an exhibition displaying materials on the 40th anniversary of President Kennedy's assassination and the aftermath. The exhibit runs through January 12, 2004. A time line shows crucial moments in Kennedy's until the assassination and features magazine materials on the national response to this tragedy. Most of the documents displayed were received through the FDLP. Go here to access this exhibit which was done, in part, for a History Channel promotion.

IUB ALF News: Those using IUB collections through Interlibrary Loan or patron referrals, should be aware that almost 50% of our collections have been moved or are in the process of being moved to the Auxiliary Library Facility. While we will miss many materials for easy reference such as the bound Congressional Serial Set and congressional committee hearings and prints, ALF's environmental controls make this an ideal move. Historically valuable congressional serial set volumes DO NOT circulate and must be used here. These and many other restricted items must be requested in advance and used in Lilly Library. Materials not listed as restricted may be borrowed on ILL. Remind patrons coming to Bloomington to use historical collections to check IUCAT ot make sure to request the materials so they can be retrieved and waiting for them. (There are no Saturday or Sunday deliveries.)

DIGITAL SUMMIT REPORT: On December 4, I attended the Indiana Digital Summit as INDIGO's representative. Called by State Librarian Barbara Maxwell, the summit was an excellent opportunity to discuss the needs and possibilities for an Indiana Digital Library (several names were proposed during the meeting) The White Paper on digitization's status in Indiana is mounted here This paper was prepared by Andrea Hough, Associate Director for Digitization and Special Projects at the Indiana State Library and Kristin Brancolini, Indiana University. It sparked a good discussion about the challenges and benefits of having a state digital library. Martha Robley (Indiana State Library) demonstrated several digital sites from other states, as well as those here in Indiana including INCOLSA Heritage Net Other agenda items included discussion of a possible digitization survey to assess what libraries in the state are doing; development of a vision; and issues involved such as standards, storage, access, funding, structure, and content. While I was one of the most vocal about the need for state documents and legal materials, others supported this as well, especially for historical perspective. The group will reconvene in February for further discussion. We should include this on the next INDIGO meeting agenda to discuss our needs and priorities. (Lou Malcomb).

Air University Student Papers-Located at Maxwell Air Force Base near Montgomery, AL, the Air Force's Air University serves as that armed services de facto graduate school. Its website is accessible at www.au.af.mil/ and provides access to a variety of publications including the journal Aerospace Power. Air University students are generally mid-career officers who are on their way to becoming Air Force leaders. They attend classes and produce papers for Air University units such as the Air Command and Staff College, Air War College, and School of Advanced Airpower Studies. A large number of their papers and theses are accessible here Access to these papers goes back to the 1990s and covers a variety of military and international relations topics. Recent representative samples include "America's Food: Does Anthrax Pose a Threat?" (2002), "Nigeria's Rising Hegemony is Essential to Peace and Stability in West Africa" (2002), "Computer Network Defense: DOD and the National Response" (2003), and "The Proposed Tenets of Space Power: Six Enduring Truths" (2003). These student papers are now being featured in GPO's New Electronic Titles service and are being cataloged under the SuDoc stem D 301.26/6-9: Be sure to let users interested in national security and international affairs be aware of these valuable resources that are being produced by the Air Force's future leaders. (Bert Chapman)

Purdue Libraries News-Libraries leadership transitions are ongoing. Dean Emily Mobley is formally retiring in January but will stay on until a replacement is found. Former HSSE Librarian Mark Tucker became Library Director at Abilene Christian University and Purdue's Management and Economics Librarian Judy Nixon is serving as Interim HSSE head. After a several month search for a second clerical position, the Libraries Documents Dept. will finally get this position filled with Janyne McWilliam takes over in January. Janyne comes from Queensland, Australia where she had worked in a real estate law firm and her husband is a postdoc here at Purdue.

The Documents Department continues making steady progress in retrospective cataloging.
Publications from the congressional foreign relations committees between 1975-1994 have
been cataloged, gradual progress has been made cataloging Senate Governmental Affairs
Committee hearings from the late 1980s-1994, extensive progress has also been made cataloging Joint Economic Committee hearings from 1975-1994, and a number of general
Army and Air Force publications (D 101.2 and D 301.2) from these time periods have also been cataloged.

Potential INDIGO Logos-These potential logos have been prepared by wife Becky. She
hopes to tweak the alignment of the letters. Email you comments to Bert chapmanb@purdue.edu
Thanks also to HSSE Library's Monica Holbrook for helping transfer these images to this page. 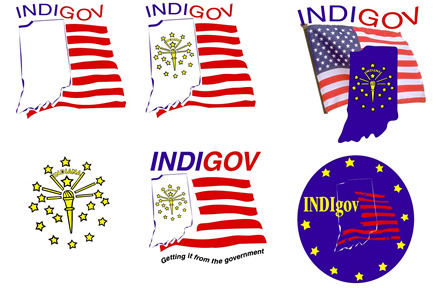